I found some great NFC infographics to explain the technology. The first one is a comparison between RFID & NFC. It captures the differences nicely. RFID is really focuses on the supply chain tracking. My guess is that tracking pets introduced RFID to the consumer. NFC is RFID for the consumer. The NFC reader/writer is free to the consumer via the smartphone. It enables contactless payments, information sharing, advertising etc. NFC may take over some components of supply chain given the cost of the reader is now zero. 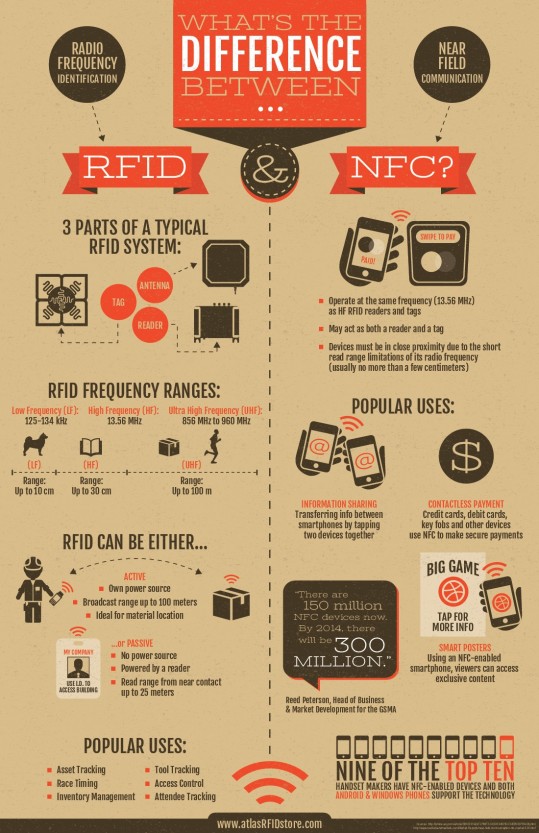 Explore more visuals like this one on the web’s largest information design community – Visually.

The second was published by Orange “Six ways NFC will change your world“. The market research says that by 2016 there could be 550 mobile handsets with NFC. That part is likely true. Most Andriod smartphones already have NFC builtin. However the limiting factor to enable these use cases for you and I is the rest of the ecosystem which tends to be much much slower to change. Take contactless payments for example. The payment industry using contacless smart cards do not have to deal with Mobile Network Operators (MNOs) but on a smartphones they do. The payment industry took years to figure it out and really make it happen. Cudos to VISA for finding a way using their Trusted Service Manage (TSM) and Host Card Emulation (HCE) on Andriod. Sorry for the tech speak but it appears that we may finally get contacless payments on smartphones BUT that does not guarantee consumer adoption. What is the (awesome) consumer benefit? The same is true for ticketing, access control, advertising, medical you name it. These are large ecosystems that must recognize the benefits, move to enable NFC and provide real value to the consumer.

This blog post was originally posted on the author’s blog. It has been reposted here with permission.